The Reederei Koepping is an owner led shipping company situated directly on the Kiel Canal.

Founded in 1984 Captain Jörg Koepping seized the opportunity to form his own company and become independent. With his first second-hand containership, named after his hometown RENDSBURG, he laid the foundations for the today’s Koepping Shipping Company.

In the meantime, the fleet has increased in size to 14 vessels including 9 which are only technically managed by the company.

The fundamental goal is the safe operation and commercial success of the owned and managed vessels.

Increasingly more charterers ask for proof of a quality assurance system before placing their orders. Therefore, the company and their ships are ISM (International Management Code for the Safe Operation of Ships and for Pollution Prevention) certified by Germanischer Lloyd since 1998.

A few years ago, increasing fuel saving issues guided the Koepping Shipping Company to be the very first company to install the “Slow Steaming Kit” on their Waertsilae engines for a so called “slow steaming” solution.

New environmental restrictions followed by emission regulations will in the future be solved with the same competence as expected by the business partners of the company. The improvement of maintenance, environmental requirements, safety and quality standards is a permanent ongoing process which will be strictly adhered to. 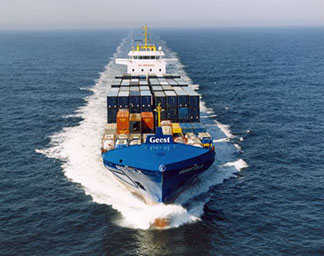